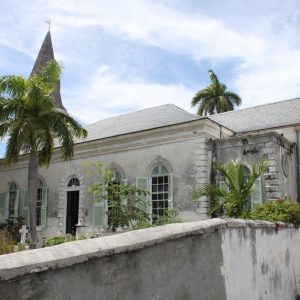 This was one of two baldachinos designed by Hawes during his  early years in The Bahamas – the other at St John the Evangelist, Deadman’s Cay, Long Island. St Matthew’s, according to Hawes, is the oldest (historical) church in the colony.

It appears that the one at St Matthew’s may have changed over time as it appears a little different to the sketch produced by Hawes.  Hawes described it as ‘a large Queen Anne style edifice’.